Recently after the increasing fuel prices, people have started looking for other affordable options. The top search trends are of Sohrab Bicycle and Electric bikes in Pakistan which include many local manufacturers as Jolta Electric, Pak Electric, Road King and Vlektra ebikes. Many people are also searching about motorized bicycles which is a new trend.

A motorized bicycle is of two types, one is conventional gasoline powered engine and the other is electric powered bicycle. Now the market has conversion kits of both types available with the prices ranging from 40 to 50 thousand rupees in Pakistan. These DIY kits are available both on line and in the market (Cycle stores)

The petrol or gasoline powered kit includes a 49cc 2stroke engine which does not need to be registered. This engine comes with its own sprocket kit and a gas tank. This engine gets great fuel mileage as a cycle roughly weighs 50 kgs. So the power to weight ratio is not an issue. The small 2 litre fuel tank is sufficient enough as it is mostly for fun/joy ride and it will last a week at least. 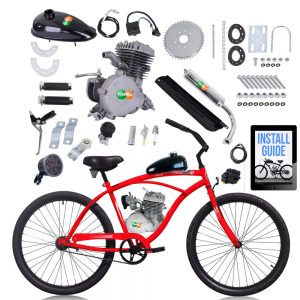 The other option is e bike conversion, It consists of a BLDC Hub motor, battery , controller , throttle assist and wiring. This kit starts from 40,000 rupees and it is also a DIY job. Though financially this does not seems like an affordable option due to its price(The prices go higher as the motor power is increased. 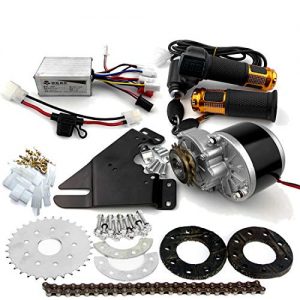 Also getting a Lithium ion based battery is also an issue, the regular batteries are big, bulky and have less back up. The charging time and aesthetically adjusting the batteries is also an issue on a bicycle. In our opinion if you want a fun ride, getting a petrol powered motor is a much feasible option as compared to the electric conversion. The e bikes still need time to mature in Pakistan.

Do let us know what you think of these conversion kits and will you convert your bicycle into one of these?