YAMAHA is known for its motorcycles and music equipment. These two may not be inter related but for a rider the best symphony is coming from the exhaust of his motorcycle. As the world is changing too many people are becoming wanderers and exploring it, YAMAHA has launched a motorcycle XTZ 125E peppy enough which will take you places and that too with a lot of fun.

The XTZ125E is designed as a versatile and reliable partner in work like transport, deliveries and business rounds, or for personal commuting. It offers agile handling and a comfortable ride from the balanced combination of a lightweight body and the deep, strong torque and enjoyable feeling of acceleration from the engine. Whether you ride in town or out into the rural countryside, on paved or unpaved roads, you’ll find the acceleration, cruising, cornering and stopping performance that you want in a motorcycle with the XTZ125E.

The engine on XTZ125E looks similar to the one which we are getting in YBR series in Pakistan,The engine produces almost 10 hp which looks less for a 106 Kg (dry weight) motorcycle but the sprocketing is aggressive and with odd tyre size this offroader is ready to take on anything in its way. Smaller 18 inch rear tyre helps in increased accelration(Larger rear sprocket + smaller rear tyre = More acceleration) The 21 inch front and 18 inch rear tyre give XTZ 125E around 260mm of ground clearance which is more then enough for an off roader. 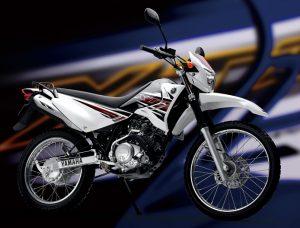 XTZ125 may have many good things to it but price tag of 4100 us dollars is way too much for this machine in Pakistan. That too excluding the cost of import and other things.But we can still talk about it at least, Thats free