Pakistan is world’s 5th largest motorcycle market and 80% of our population uses motorcycle for regular and daily commutes. The motorcycles in Pakistan range from 70 to 150cc and above.

There are almost 100 companies who assemble motorcycle locally. Some companies are even exporting them but in general our motorcycle industry is stuck in a stigma of producing old looking motorcycles. 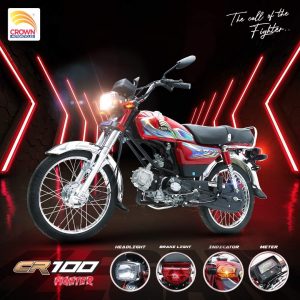 Crown is a fairly reputable company with it’s spare parts and motorcycles being sold across Pakistan but they’re facing the same issue. They’re developing old tech and old looking motorcycles for a long time.

Companies are of a point that the audience is not educated about modern and better motorcycles. They’re correct but it’s also companies mistake. In modern world companies educate their audience and prospect buyers about the new development and new products.

I wonder when will we get rid of the decades old shape and technology. When the graphic change will not be accepted as a new motorcycle.