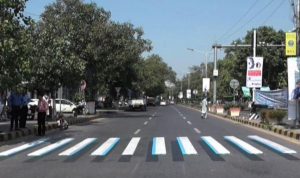 Not only the road manners will improve, these 3D Zebra crossings will also add to the beauty of Lahore.