Pak Suzuki’s sales and marketing strategies are a bit like being Friends with benefit, as long as you are making them money you are acceptable and termed as need of the time and company. A fine example of this is Suzuki Mehran, Suzuki Pickup and Suzuki Carry. Pak Suzuki has never got any success with its sedans so far in the history of their business in Pakistan and its about time when they have announced to kill another one. Suzuki CIAZ is officially discontinued because of poor sales! 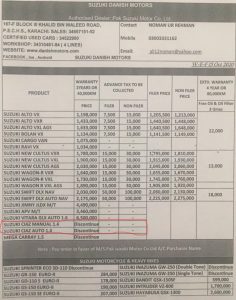 Pak Suzuki has discontinued the Baleno , Kazashi and Ciaz so far, their only successful sedan has been the Margalla so far. Pak Suzuki is known as a brand which has good small capacity cars or hatch backs, Any expensive sedan from them just could not make the enough cut in the market and steal the show from Honda and Toyota.

CIAZ was a good edition to fleet of Pak Suzuki and I hope someday it would be replaced with someday good, I hope that the SOMEDAY is near!
GODSPEED