Electric cars are a reality now and TESLA is example of working effortlessly to bring a dream into reality, Companies all over the world are now taking ELECTRIC VEHICLES seriously and working on it. General Motors has landed its new HUMMER which is all electric. Its bigger faster and badass than before. 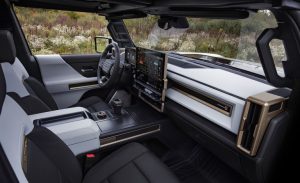 The New Hummer is really new, it gets new every thing, The interior is spaceious,roomy and purpose built. On design elements it retains the lines of old Hummer but with its own flavor. The power plant is most amazing thing, its setup of 3 electric motors which deliver an output of 1000 horses and endless torques. Such a huge truck can do zero to sixty in 3 seconds! Thats new for Hummer.
This monster will make its debut in 2023 and will be available in number of different trim levels starting from 80k dollars!