Jolta Electric has an image of innovative, up coming E bike manufacturing firm of Pakistan. To keep their Ebikes simple and acceptable to general public, they have used chassis of a 70cc motorcycle. It also helped them to keep the costs low. 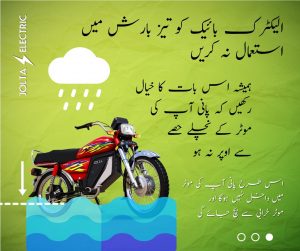 Early models were based on very basic technicalities. Jolta Electric claims to have changed that and launched two new variants which have lithium ion batteries and improved technology.

These Ebikes are available for purchase through Jolta Electric. The small (70cc) Ebikes costs around 130k while the other (100cc) costs around 150k. The Ebikes, if they want to succeed should be cost effective so they can really make a difference.