There is nothing like saving an old motorcycle, its something which requires lots of time, effort and money to do so. Today we have came across an amazingly restored 1992 Honda CD70 which is period correct and restored up to genuine specs. This restoration job was carried out by MKBH Autos and they have amazed us again.

In the detailed video, Khubaib Bhatti (Man behind MKBH) told us that this motorcycle needed many new thing, It was in start condition but barely running. When the gentleman kicked it after a week, The newly restored CD70 roared to life. 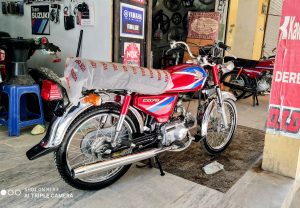 Khubaib told us that restorations usually cost a lot but this motorcycle costed around 55,000 pkr in terms of restoration budget. MKBH Autos can be contacted in case any such services are required. we vouch for them!