Prime minister of Pakistan Mr Imran Khan has recently launched Pakistan’s first indigenously manufactured electric motorcycle. This bike was approved by the government last year under Pakistan Electric Vehicle Policy 2020-25. As per this policy, Government intends to convert 30% passenger vehicles and 90% commercial vehicles to EV by 2030 and 2040 respectively.
Imran Khan has declared it a futuristic step and said that EV policy is headed in right direction but I have a few reservations. 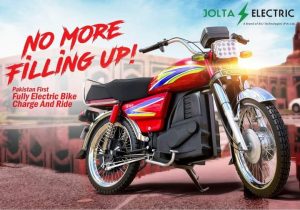 Shape of E bike:
The E bike may be innovative but the shape is not at all. The shape reminds of 1960s and 1970s.This isn’t a good thing at all.

The mechanicals:
The over all mechanicals of the bike are also out dated, talk about suspension,frame,seat. All were designed back in the day.

The Batteries and Motor:
The E bike uses a hub motor and lead acid batteries, these are out dated in terms of EV’s globally. This E bike costs much higher than a conventional bike, hence this needs to be much economical.

E bike and General perception:
The e bike needs influence based marketing and perception build up that it is what future needs.
The step is definitely right and a step ahead. Let’s hope the Company sustains its products and tries to make it successful.