Pakistan may be one of the few countries which is badly suffering with inflation and lack of innovation. Another price hike of Atlas Honda Motorcycles is on its way.
Pakistan’s most selling motorcycle company Atlas Honda is known for its retro yet new motorcycles. By retro I mean retro technology and by new I mean graphics. 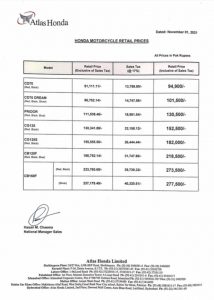 Jokes apart this is an alarming situation for everyone or at least for me. The basic bare bones Honda CD 70 will now cost you 94 thousand. If that’s not alarming what is.
The price hike from leading motorcycle manufacturer means other will follow the trend and other companies like Yamaha, Suzuki and even local manufacturers will also raise their costs.
The real question remains that who is to blame? Inflation or lack of government policies.