We all know that when it comes to launching new versions, motorcycle manufacturers do not priorities mechanical upgrades. They always follow the rule of “If it ain’t broke, don’t fix it.” Despite the fact that this policy has had a significant impact on how they conduct business in this country. 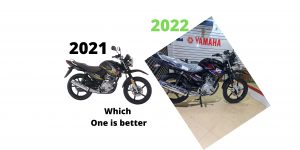 Yamaha has just released the 2022 version of the YBR125G, which features merely a new visual. The new visuals drew a comparison between the old and new designs from motorbike fans.

Many individuals claim that the former variant’s neon/yellow color impact made the black color more aggressive, but the new black color is less aggressive and apparent. Personally, I think the previous design was more assertive and appealing than the new one!