Jolta Electric a Pakistan based startup which has launched an electric version of 70cc bikes in the past has now launched a hybrid bicycle.

Jolta JEC-CYCLE is a hybrid, based on old moped technology it has an electric powered motor and also comes with paddles. 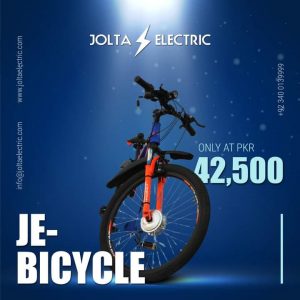 Jolta JEC-CYCLE has a maximum speed of 35 kilometers and it has 36/12 AH Lithium Ion batteries which take 3 hours to charge. It comes with a 250 watts motor and has a range of 30 kilometers.

Jolta JEC-CYCLE comes with tube less tires and fancy colors. Priced at 42,500 it’s a little higher but the product has better specifications as compared to other Jolta products.