As Pakistan is in the middle of fuel crisis and increasing fuel prices, the commuters of Pakistan are looking forward to the electric bike revolution. Right now the chinese imports and local start ups have jumped in to this scenario and we have companies like Vlektra, Road King and Jolta electric but their products are not up to the mark (make an exception for Vlektra here).

Many people are hoping that Japanese giants Yamaha, Honda and Suzuki will launch affordable electric bike options for Pakistan. These bikes should have latest tech and extended battery range as compared to the chinese bikes available here. These E bikes should be a complete package. Like other countries, Pakistan is also a big market for two wheelers. The electric two wheelers are now generally better accepted in Pakistan as people have developed an understanding about these contraptions. Also Honda and other Japanese giants have been experimenting with the electric 2wheelers. 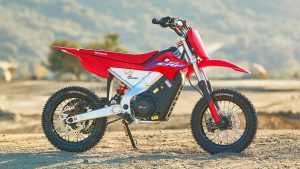 Honda has been doing some great work under closed supervision and have developed their first electric two wheeler off road bike. The thing with Japanese manufacturers is that their products are refined, well thought , well executed and built to last. In my opinion, we are not going to be that lucky to have these electric bikes from these giants soon.