Famous automotive manufacturer revises prices of its motorcycles.According to a circular Pak Suzuki has revised its motorcycle prices and new prices are as under. 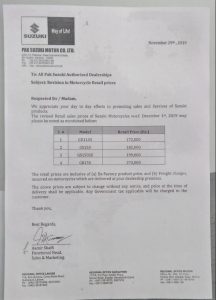 This recent hike in prices is subjected to the recent dip in Pakistan’s automobile sector.The question here arises that Pak Suzuki is not only a motorcycle manufacturer but one of the oldest and largest car manufacturer of Pakistan they have been in this business for a long time and should have developed a better mechanism of pricing by local manufacturing and strengthening the local vendor industry instead of relying on importing spare parts and assembling motorcycle here.

Let us know what do you think of this price hike and how you see it effecting Suzuki motorcycle sales.