Yamaha Motor Pakistan has recently launched a new graphic update of its YBR125G .This motorcycle is in its league of its own as its Pakistan’s only 125cc cross over motorcycle. YBR125G was introduced in year 2015 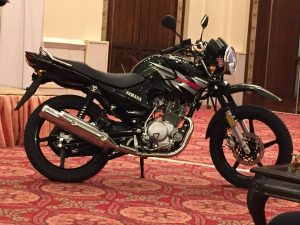 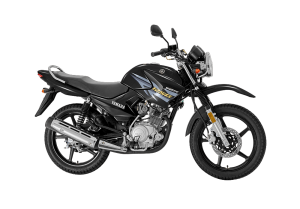 Yamaha enhanced the performance of YBR125G with up jetted carb, a better freely flowing muffler and breathable air filter. These changes had improved the performance a lot and the problems of low power were resolved to good extent. The 2020 update only gets a new graphic which is inspired by Adventure and Off road styling. 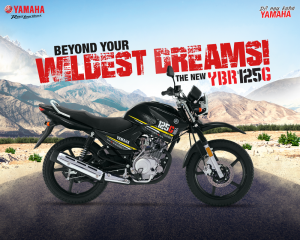 Design: Design wise this 125cc commuter looks very different and has a rather Macho appearance to it. A muscular fuel, high front fender along with a Chrome Headlamp guard adds to the off-roader characteristics of this machine. These air scoops come in body color with YBR125G written on them. The front fender, visor, scoops and tail section looks well proportionate. Speedometer dials are attractive and look even better at night. The speedo comes equipped with fuel gauge, rpm meter, trip meter and gear position indicator.

Engine: YBR 125 G comes with a 125cc OHC(over head cam shaft) engine mated to a very smooth and precise 5 speed return shift gear transmission which is unlike the  YB125Z which is only Yamaha Motorcycle which gets a simple gear shift pattern as Pakistan.This bike is also air cooled and its engine is a CV carb based and it has a counter rotating balancing shaft in it which helps in controlling vibrations. YBR125G makes 10.05 hp which may seem less but it is adequate enough to haul it.  This engine makes sure a smooth & linear power delivery with mileage up to 48 /52 kmpl depending upon your riding style.

Chassis, Suspension and tires: YBR125G has a diamond frame which is very well balanced, bike also comes with telescopic front forks which are covered with Fork Boots to protect them in off R

road conditions provide good damping, on the rear it has swing arm based dual shocks suspension setup which is adjustable up to 5 steps for pre-load. YBR125G has 18-inch aluminum alloys with block pattern or dual-purpose tires. These tires can be used on & off road. It uses a 3.00/18 F and 90/90 18 rear tire size. The breaking duties are performed by single piston caliper disc @ front and a drum break @ rear which provide adequate stopping power. This bike weighs 113 kgs and its weight is very well balanced, due to grippy tires, this bike is a charm to ride

Ride Quality: The ride quality on this machine is exceptional as the rider does not feel vibrations on his feet, legs and arms. Due to a well-balanced chassis the bike is smooth and comfortable. Even on triple digit speeds the comfort level is good. YBR125G is also used in touring and it performs decent. It also gets plenty of attention on the road.

Verdict: Pakistan’s market is slowly growing and Motorcycle industry is on the way towards betterment. Yamaha is doing good in 125cc premium motorcycle segment and it is compared with HONDA CB125F & CB150F. The YBR125G makes a better case in offer to value for money. Its parts are also available @ Yamaha dealerships and maintaining this motorcycle is not an issue. For 160,000 , it offers greater value as compared to the competitors as it can be your daily commuter or your pleasure ride.